You are here: Home / Featured / Chaos in the midst of God’s Sovereignty and Provision

The best laid schemes of Mice and Men, they say.

It’s easy to plan a long vacation or just a weekend family get-away and find Murphey’s law creating some good tests to your patience. When planning a mission, on the other hand, for some reason I tend to think, “I’m doing this for you God. Everything should go just as planned. Right Lord…. Lord?”

Unfortunately, even the most worthy of causes are not immune to the laws of human error and chance.  I might add, the closer you follow God’s way, the more of a threat you are to the enemy and his futile schemes.  So begins my fourth visit to Turkey.

There was nothing unusual about the long journey to Istanbul. In the over 40 missions I’ve been on, one thing I’ve been fortunate to rely on are those faithful men and women who handle and guide my equipment (insert sarcasm) from flight to flight. I’ve actually never missed a program due to a delayed bag and I’ve never had an airline tell me that they lost my luggage. I guess my time had come.

My flight landed at midnight. As the belts and gears stopped running, I thought to myself, surely my baggage is just one of the last bags to come out of the mouth of this metal luggage dragon (I was tired). Nope. Surely it will be on the next flight the following afternoon? Nope. Surely one of the 4 or 5 flights arriving that evening? Nope. How about the next morning after that… I digress.

After keeping my ride, whom I’ve never met, waiting for over 2 hours as I made my way through immigration, lost luggage claims, and customs, I was surprised to see him still there as I exited the customs area. He was so tired (it’s now after 2 am) he got us on the wrong bus going in the opposite direction for, what should have been, an hour or so long journey to his uncle’s house.

Exhausted from being up for over 35 hours without a full night’s sleep, as soon as I walked in, uncle Safak said in his broken English, “ok, we leave in one hour for airport to meet team and fly.”  “No equipment!” I replied.  Both exhausted, we shrugged it off and went to bed and I didn’t meet the team. But, there was still time to catch a later flight alone and not miss any programs since that next day was just a travel and debrief day.

Anxious and truly anticipating to find my luggage, I made my way back to the airport thinking to myself, well, surely they at least know where my luggage is? And once again… Nope. “We lost your luggage sir”, said the metal dragon keeper with his thick Turkish accent.  “Okay God… no props, no show, no tour.” My thoughts naturally wandered to suppose that I needed to confess some sin. And maybe I didn’t pray enough before I left and instead spent too much time rushing to have everything ready. Whatever the case may be, this is obviously not God’s will, so, “Lord, I come before you right now….” And on goes my feeble attempt to appeal to the Lord to send his metal airport dragon slaying angels to come and subdue the greedy tin beast to relinquish the treasure that is my show… to no avail.

The next two days were all but debriefing and performing as planned. Instead I sat, alone, tired and discouraged at the airport Starbucks or Popeye’s chicken. Yep, they have those here.

Meanwhile, in a galax… err, city, far, far away (about a 3 hour flight), called Diyabakir, the rest of the team had been forced to retreat and remain indoors. You can read about that story and update here.  Needless to say, the city was on edge, and the host community of believers thought it wise to cancel the two days of events we had scheduled.  This gave me more time to retrieve my luggage!

Back in Istanbul, after two days of sitting in the airport, my equipment finally arrived! I honestly thought it was gone for good. I kicked the luggage dragon in the head and headed for the domestic airport terminal.

Wait a sec, “how am I going to pay for another airline ticket?” I recalled the night I was with uncle Safak when I asked him what would happen to the ticket they had already purchased for me. He simply blew into his hand and said “it flies away”.

At this VERY SAME time, a dear brother in Germany whom I’ve known for many years (he has even hosted tours for me there) sent me a gift via paypal in Euro’s that more than exceeded the cost of the extra plane ticket. I jumped on the next flight at 1 am to meet the team in Diyarbakir from where we continued our journey to the next schedule city of Mardin. I didn’t miss a thing, except the fellowship I would have had, had I been with the team since the start. I was exhausted and hadn’t had a real night’s sleep in about 4 days.

Just before I got on the plane, I received this message from a dear brother from my home church who was completely unaware of my situation at the time he sent it:

“Adrian… I’m praying for you and wanted to remind you that we serve a God who works at His own pace. He’s never in a hurry even in the times we’d like Him to be, and yet always accomplishes the things He wants to do. And knowing both His pacing and patience in equal measure it’s important to know the things He’s doing in our lives aren’t being delayed.  Just like the things He’s created grow at a very gradual pace and the trees He made produce fruit very slowly, He does this to remind us of how patient He truly is. Not only proving His mercy toward our mistakes, but the assurance of knowing the good and beautiful things He started in our lives will be worth the wait to see when finally in bloom. All we have to do is trust Him and preserve those crops”.

Needless to say, I was encouraged and heard exactly what I already sensed in my heart.

Now that we’ve been on tour, looking back, my situation was trivial and pretty much had little to no bearing on the tour, or at least nothing I could change, anyway.  I was on time, all my needs were met, and we are sharing the gospel with those who truly have never heard. 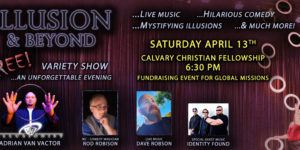