You are here: Home / Featured / My Story a New Direction

I always enjoy leaving my Southwestern abode to experience the seasons up in Minnesota. I spend a lot of time there, often times doing events like the “Explore the Evidence” event with FaithSearch international. We usually have over a hundred people come these vents every year and we great response. One of my topics was titled the The Magic of Christmas.

I wanted to take a moment to share how significant the work we are doing with FaithSearch is, by sharing a bit of background–my “ministry story” if I may–and how this great organization has been a privileged to learn from and serve with.

I was raised in an “irreligious” home. An environment downright hostile to all things of faith. When I first came to faith in my later teens, I remember the reactions I received… they were unpleasant to say the least. I was not permitted to ask questions, to talk about spiritual things, to challenge assumptions… the works. It felt more closed than some of the closed countries I’ve been in as an adult. 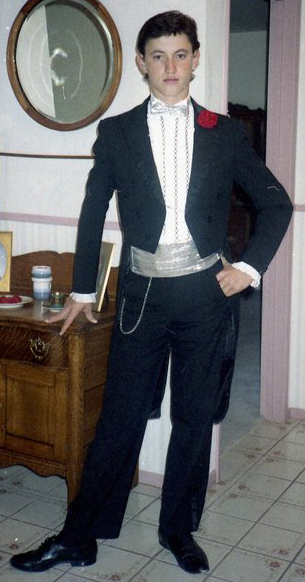 On the one hand, I can’t blame people around me when I first believed as I was super energetic about my new-found faith and immediately had the need to share with every person I came into contact with, stranger or not. Let’s just say, I wasn’t perfectly tactful on every occasion. On the other hand, there was definitely some pain experienced by my family from their own upbringings which clearly led to an anti-Christian bias that I was never really given the chance to learn about. To this day, as far as I know, I remain one of the only evangelical followers of Jesus in my immediate family.

At that time, I was already competing as a stage illusionist. My faith challenged me to give my gifts and abilities to God, so for a short while, I put out of my mind the idea of being a professional magician (my dream).

Then I met Andre Kole, world renowned illusionist and ministry of Campus Crusade for Christ (Cru) and he graciously put me onto his touring team in summer of 1993, as his technical director (lights and sound) and a guest performer. I was still a teenager as our eight-member team traveled around the country with five tons of equipment doing about twenty performances every month. 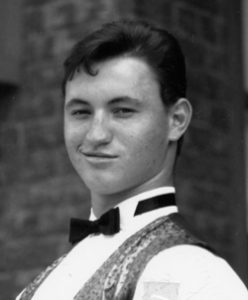 1992 – Playing the “Wizard of the West” at Old Tucson Studios

During our off time, I was doing a one-man, anti-drug-and-alcohol school assembly show for K-12 audiences. I think I put fourteen thousand miles on my pick-up truck in one month as I did about 125 performances throughout the midwest, almost each in a different town!

Through Andre’s stellar example, day in and day out on the road, and the discipleship of another road team member, one of my most cherished God-given friends (Dana Tison) I was taught how to walk with Christ, to share my faith, and to use the art of illusion as a tool to share Christ with those outside of the context of a local church.
After I had won the internationals at the World Magic Seminar in Las Vegas in 1994, I ventured out in faith with another great friend, comedian Rod Robison, along with Dana Tison, and other variety Christian artists to produce my very first variety arts outreach program in December of that year in my home church, Casas Church, in Tucson, AZ. Over 800 people came to witness the show, with me headlining the program. I shared my Gospel presentation which Andre Kole and Dana Tison so generously helped me develop. Granted, eighty percent of those present were probably from a church background, but out of that audience we had fifty-six people indicate commitments to Christ! 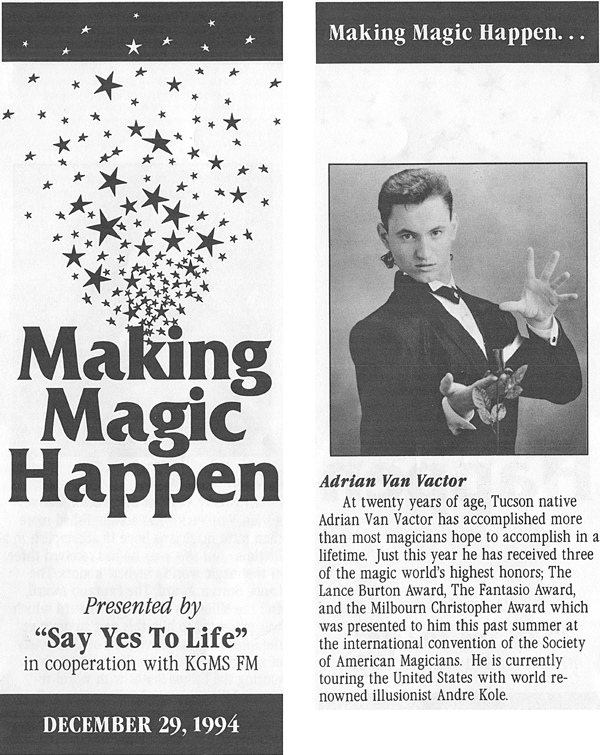 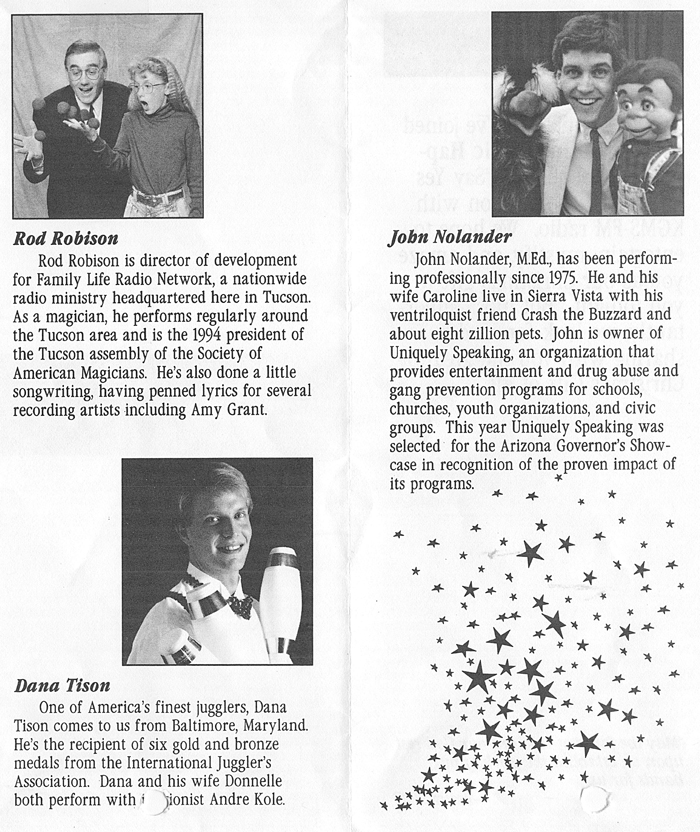 Upon completing the finale, I remember weeping as I ran off the stage, experiencing this sense in my heart that this is exactly what I needed to devote my life to: Sharing the Gospel with the lost… with an emphasis on those who have never heard. Andre Kole was instrumental in encouraging me to focus on unreached people groups internationally, and to keep my program versatile and easy to transport. Making me a part of his touring team was so vital to my spiritual growth and my performance. 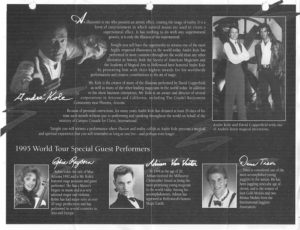 Touring with the Andre Kole Team (CLICK TO ENLARGE)

As of today, I’ve now been on over forty-five missions all over the globe with hundreds of thousands in attendance, thousands coming to Christ, new churches started… in some of the most closed places on earth, yet opened wide simply because I showed up as an “entertainer.”

I have refined my mission and vision over the years. Being that most of my events have been on university campuses and high schools with my customary Q&A time afterwards… I quickly found that to reach the lost I could not simply share the Good News, but, also needed to provide a reasonable defense of it.  In other words, clearing every stumbling block (doubt) so that a person could have an unobstructed view of Christ. This became a core value and naturally, the majority of my studies has been in the area of apologetics and world-views.

Over time, however, I became somewhat disillusioned. Individuals who indicated a commitment to Christ were not always becoming disciples (Christ followers). There were times I would return to a country I had ministered in previously, to discover large stacks of response cards from students who had attended my programs before and even indicated commitments to Christ–and no one ever contacted them, or invited them to church or an on-campus Bible study! It seemed like I was doing all of this for nothing. I discovered another core value–that it wasn’t enough to simply share the Gospel… with evidence; I also needed an intentional strategy in place which would maximize our efforts to make disciples, not just “decisions”.

In 1999, I met Dr. Don Bierle, president of FaithSearch International who has become another wonderful, like-minded/hearted mentor for the past fifteen years. He had also experienced some of the same frustrations I have in working with local ministries being responsible to follow up the fruit we started. Being a scientist and in ministry for nearly forty years, he developed the strategies, the curriculum, and the ministry philosophy to maximize our work as outreach specialists in a way I had never seen before. 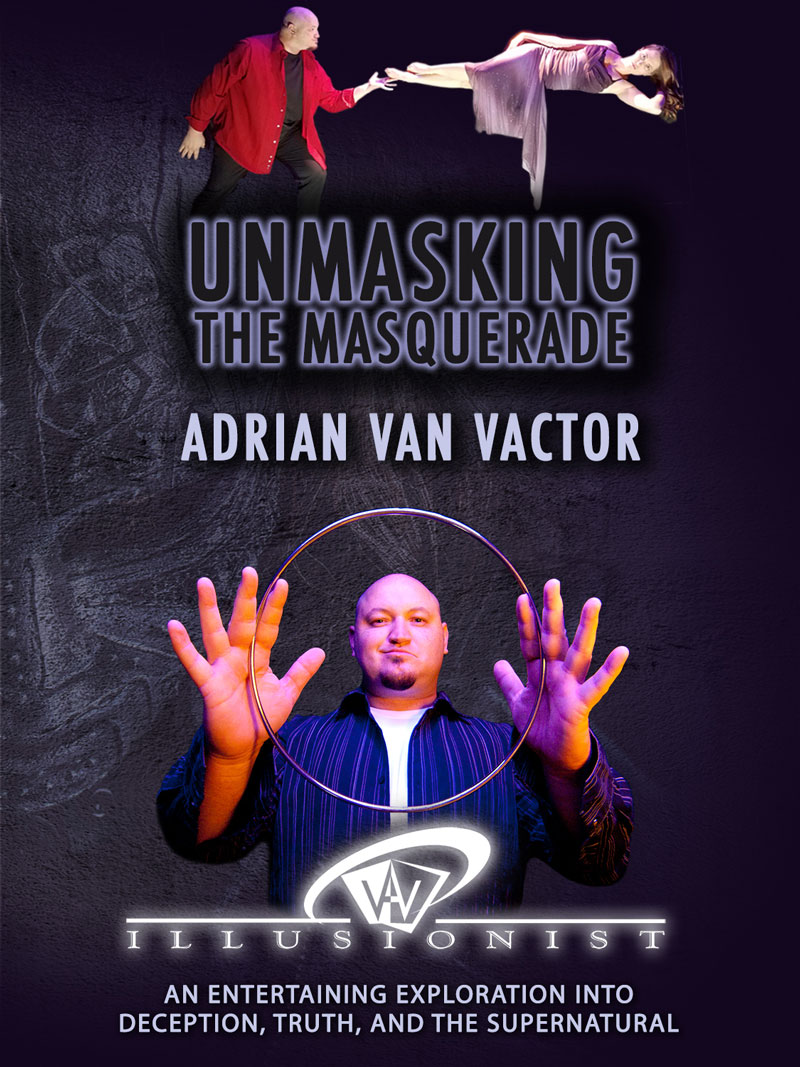 I have worked with FaithSearch and Dr. Don Bierle off and on for the past fifteen years. I have implemented much of what I learned from this ministry. I was so touched witnessing one fruitful result of these strategies during my first tour in “name”-stan (several workers have been deported so I’m going to keep the name of the country off my blog) several years ago. I met a worker who came up to me at one of our programs on a university campus. This person shared that he/she had seen me at his/hers own university campus in his/her home country in East Asia 5 years prior. Keep in mind, this person’s home country was a completely closed one that I had toured in 3 times. Now, here he/she is, serving in another closed country! That’s the kind of fruit I wanted to see and experience. Multiplication! In 2012, Don began to challenge me to join full time with FaithSearch and I have been praying about making this move since.

A Partnership Comes Together

In the summer of 2015, I had several teaching opportunities to present what I now call, Unmasking the Masquerade … a presentation I’ve been refining since I met Dr. Bierle, which is a hybrid of his FaithSearch Discovery presentation I was trained to teach, and my own performance and teaching. Unmasking the Masquerade is the title of our recently published book too which you can learn all about here! All summer, the Lord had been really impressing upon me to do this presentation more and more. I have found it to be very effective in helping Muslims overcome the common misconceptions they hold about Jesus and the historicity of the gospels (the Gospel… with evidence). 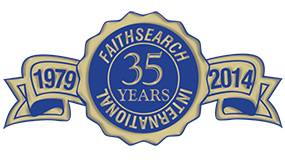 As a result of the positive fruit I have seen working with FaithSearch over the years as well as several other life changing factors, I’ve accepted the challenge. Dr. Bierle recently presented a proposal to me and to the FaithSearch board of directors. They voted in favor of having me become the international and southwest regional director for FaithSearch International!

How will this change my mission? Not much will change. As you’ve probably read in years past, my mission has always been simple and clear:

The primary mission of Adrian Van Vactor International Ministries (AVVIM) is to utilize the art of illusion as a tool to bridge cultural and generational gaps and communicate the Gospel of Jesus Christ with the distinctive combination of apologetics and entertainment.”

My new position will have some added responsibilities, all of which fit very well with the work I already do. Over the next few weeks, I’ll be sharing what I have learned and have implemented in many ways already into my ministry work, but will now be much more intentional about in the years to come with FaithSearch.

About the Author
Adrian Van Vactor is an international award-winning illusionist, story teller, inspirational speaker and contender for the faith.